As anyone who knows me is aware, all I want in life is great media products that celebrate women and feminism. Seriously.

I was pretty bummed out when the first trailer for Suffragette came out and had more big orchestral music than Titanic. I’ve been having the same problem with many biopics in the last few years, The Imitation Game to mention the most recent one: with such complex, rich stories, is it really necessary to amp up the drama?

I appreciate that things were bleak as fuck in 1912 and that life for women’s rights activists was a nightmare. I like that the film seems to show that it wasn’t just rich bored educated women who fought to vote. The big violins and abundant crying, though, give it a “lost cause” feel that really doesn’t satisfy me.

The only moments of joy that Carey Mulligan’s character seems to have are the ones where she is being a homemaker and playing with her children. I’m sure Emmeline Pankhurst would have approved, but I hope we get more than this in the full movie.

So far, this version of the suffragist movement reads like a dramatic, sadder rendition of the only other cinema suffragette I can think of, Mrs. Banks from Mary Poppins (who, in retrospect, was fab and also much smarter than what she was made out to be, and the opposite of a bad mother).

Anyway. I had set my all the feels aside and suspended all judgement until the film release. I would only send pissed off emojis to my friend Danielle every so often. Then these posters were released: 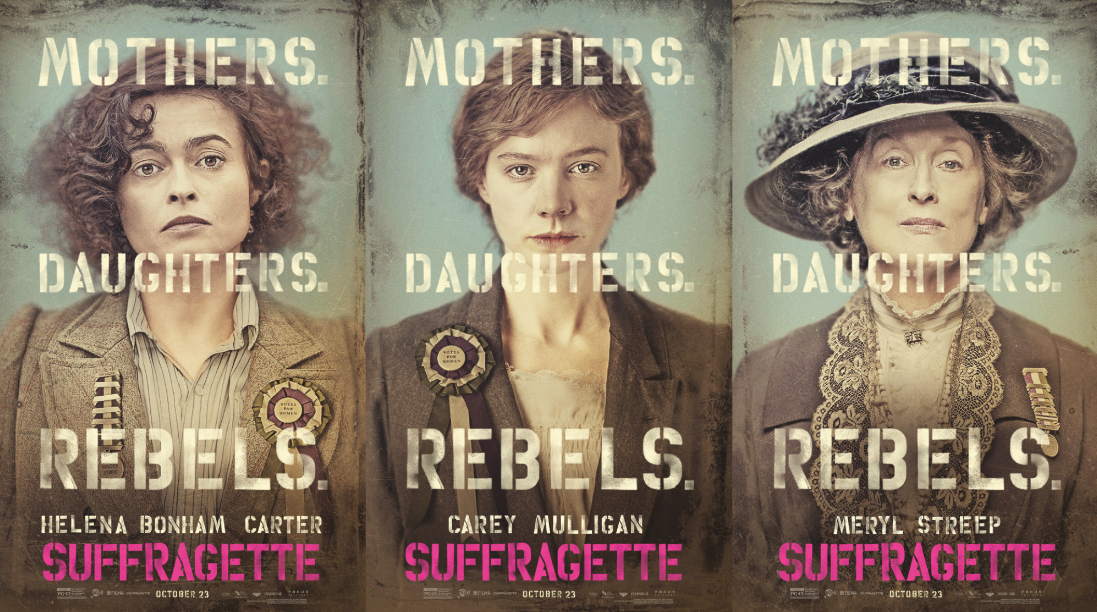 Whoever curated this campaign clearly never did anything that had to do with feminism. It would have been enough to watch the trailer: Carey Mulligan says about a million times that this is about recognizing women as humans as opposed to arm candy/babymakers/moneymakers.

What are the women on the poster? Mothers. Daughters. Rebels. They can be only identified in relation to others, because by themselves they are nothing. While I know that this is not what the poster means to say, this is a dangerous rethoric and I am, yet again, pretty bummed out that it was used in relation to the suffragettes.

While I don’t doubt the intentions of writer and director of the film, both very talented professionals, it feels more and more like the funding of this film came from the wrong place: riding the wave of pop feminism rather than doing something with a soul and some – any – sense.